Bray and Wicklow Choral Societies will perform the Irish premiere of Howard Goodall’s new work – ‘Invictus: A Passion’ on Saturday 9th February at 8.15pm in St. Andrew’s Church in Westland Row. Soloists are soprano Sarah Power and tenor Ross Scanlon. Tickets €20 available from Eventbrite – Westland Row or at the door on the night. 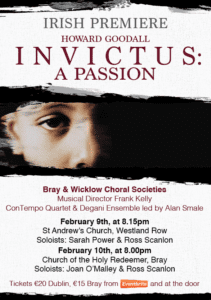 Mr Goodall will attend the Irish premiere of ‘Invictus: A Passion’ and will introduce the work to the audience.

‘Invictus: A Passion’ is a musical retelling of the passion of Jesus Christ. The work is unusual in that the story is told from the perspective of women using texts written by women. It describes human suffering and persecution, but also the transformative power of love in the face of tyranny.

Howard Goodall CBE is one of Britain’s best known composers. His choral masterpiece ‘Eternal Light: A Requiem’ has been performed by hundreds of choirs all over the world since its premiere in 2008. He has written scores for many films and television programmes, such as the ‘Mr Bean’ series, ‘The Vicar of Dibley’ and ‘Blackadder’. He is a regular presenter of television programmes on music. He was Britain’s first ever ambassador for singing from 2007-2011.

Bray and Wicklow Choral Societies, under the musical direction of Mr Frank Kelly, are choirs with a long tradition of performing works from the classical and modern choral repertoire. Wicklow Choral Society performed the Irish premiere of Howard Goodall’s ‘Eternal Light: A Requiem’ in 2010.

The work will be performed a second time by the choirs on Sunday 10th February at 8.00pm in the Church of the Most Holy Redeemer, Main St., Bray. Tickets €15 available from Eventbrite – Bray , at the door on the night, or from a choir member.

The Society has no performances planned at present.
Click here to order>>